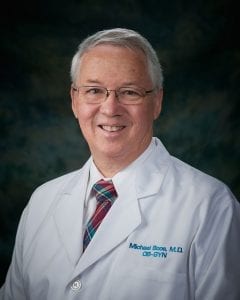 Dr. Michael Boos, Jr. was born in New Orleans, Louisiana. He attended schools in New Orleans where he graduated from Jesuit High School, Louisiana State University undergraduate, and Louisiana State University School of Medicine. He completed internship and residency training with LSU Division of Obstetrics and Gynecology at Charity Hospital. He is board certified in Obstetrics and Gynecology and is a Fellow of the American College of Obstetrics and Gynecology. He has served on the Board of Directors of the Women’s Foundation Inc. from 1986 to present. He has served as President of the organization for two years. He has also served as Chairman of the Board of Trustees for Women’s and Children’s Hospital.

Dr. Boos is married to Pamela Boos and together they have two children both of whom are physicians. In his spare time he enjoys traveling with his family, reading and woodworking.